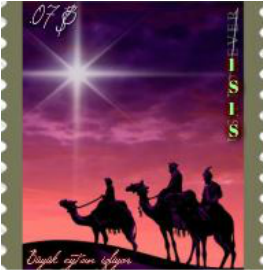 The Islamic State (aka ISIS) has issued its first postage stamp. The stamp is remarkably similar to one issued by the USPS in 2014. Megan Brennan, the US Postmaster General, tweeted:
meg  @uspssssssst
@ISISstampEDE Hey guys thts all u got, a crap rip-off? Bn thr, dn tht
An ISIS postal spokesman in the San Francisco area told Philatel-E21 that the similarity between the two stamps is purely coincidental. “Allah is making all things,” he said. “Sometimes he gets tired. So what?”
The stamp is being issued, for the time being, in only one denomination, .07 bitcoins. The inscription, “Buyuk Shayton kuzatib” is Uzbek for “Great Satan is watching.”
While we suspect that not many of the stamps will be stuck onto envelopes, the new stamp is one more step towards national legitimacy for ISIS. Although it is unlikely that it will be recognized by any other postal services, we received a notice from the folks at Scott that they will be adding a new Islamic State section to their stamp catalogue.
For those interested in acquiring the ISIS stamp, the Scott number of the stamp is, of course, 1. Color: magenta, blood orange, lime and black. Available in rolls of 666.